Missouri Journalism School Emeritus Associate Professor Berkley Hudson, who has co-taught a Peace Studies course on authoritarianism and democracy for several years, has written a new book and curated a nationally traveling exhibition of photographs based on the work of Mississippi photographer O.N. Pruitt (1891-1967).

Pruitt was for some forty years the de facto documentarian of Lowndes County, Mississippi, and its county seat, Columbus—known to locals as “Possum Town.” His body of work recalls fellow Americans in circumstances ranging from the mundane to the horrific. From formal portraits to candid images of events in the moment, Pruitt’s documentary of a specific yet representative southern town offers viewers today an invitation to meditate on the interrelations of photography, community, race, gender, and historical memory.

Hudson was photographed by Pruitt, and for more than three decades he has considered and curated Pruitt’s expansive archive. O.N. Pruitt’s Possum Town: Photographing Trouble and Resilience presents Pruitt’s photography as never before, combining 194 images with a biographical introduction and Hudson’s short essays and reflective captions on subjects such as religion, ethnic identity, the ordinary graces of everyday life, and the exercise of brutal power. The  book’s publisher is UNC Press in partnership with Duke University’s Center for Documentary Studies.

The National Endowment for the Humanities is a key sponsor of the exhibition. The Peace Studies Endowment is one among the Mizzou grants also supporting the exhibition, which premieres February 2022 at the Columbus, Mississippi Art Council’s Rosenzweig Art Center.

All Photographs by O.N. Pruitt. Courtesy of the Southern Historical Collection, University of North Carolina at Chapel Hill Libraries. 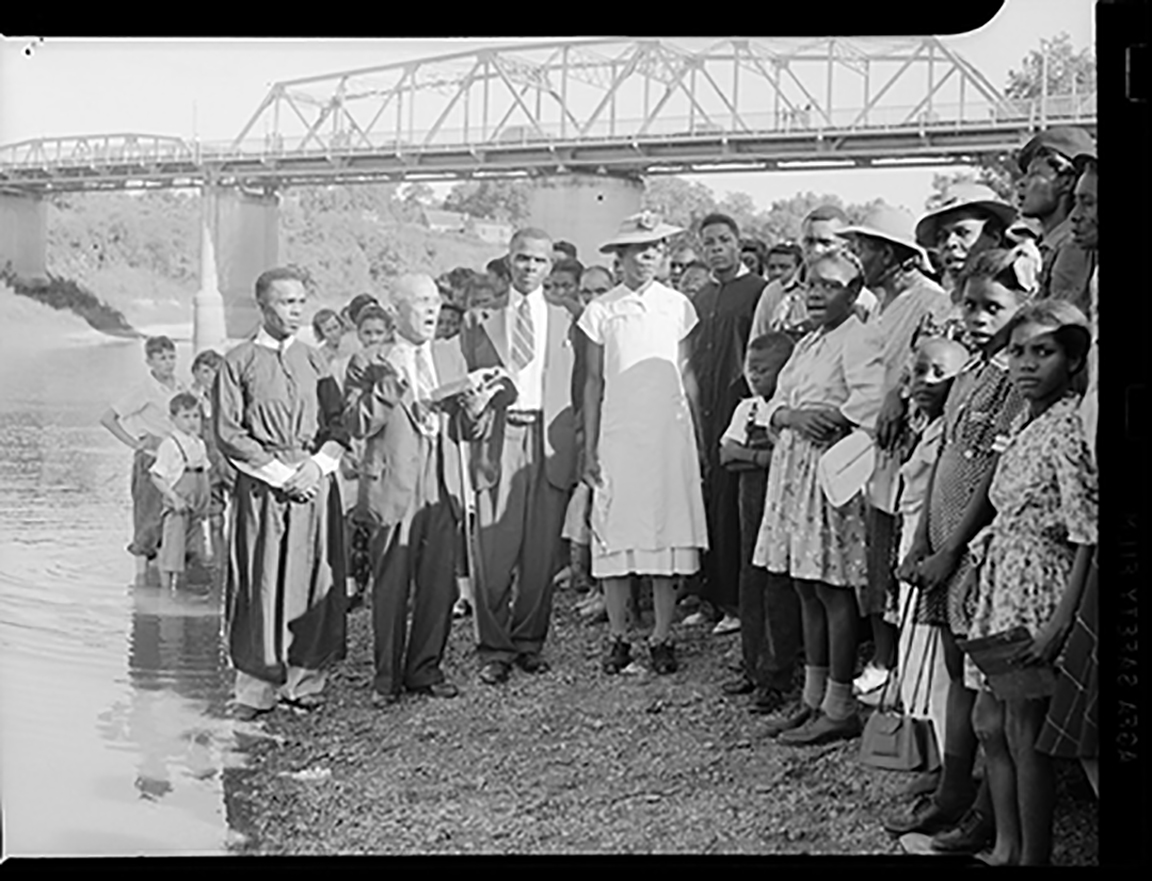 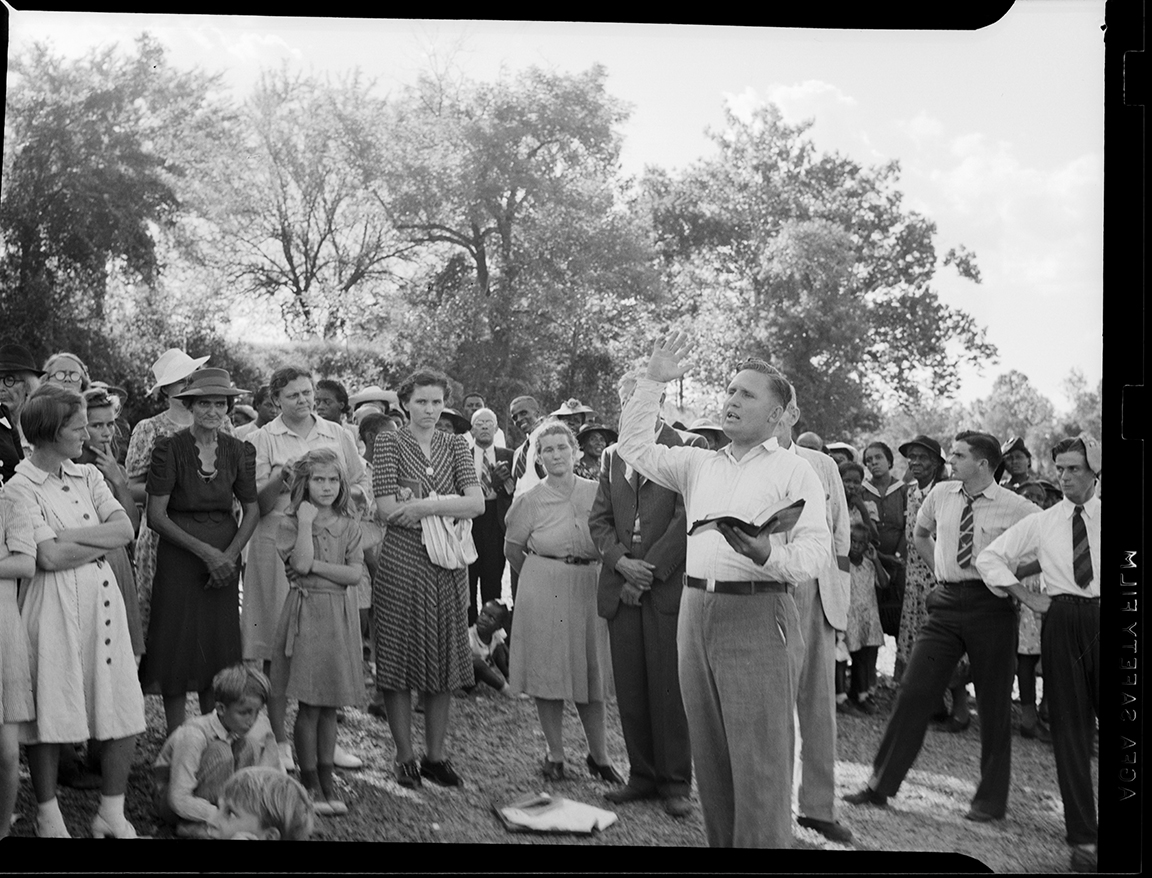 (Above) Black church groups and white ones gathered along the Tombigbee riverside on Sunday afternoons in a measure of Christian harmony, serving as witnesses for one another. In the early and mid-twentieth century, many photographs and films were made of baptisms of either Black or white church groups, but they normally didn’t show the two races together engaged in this practice. Religious studies scholar Charles R. Wilson of the University of Mississippi said the images astonished him particularly since they happened in a time of apartheid and racial violence. 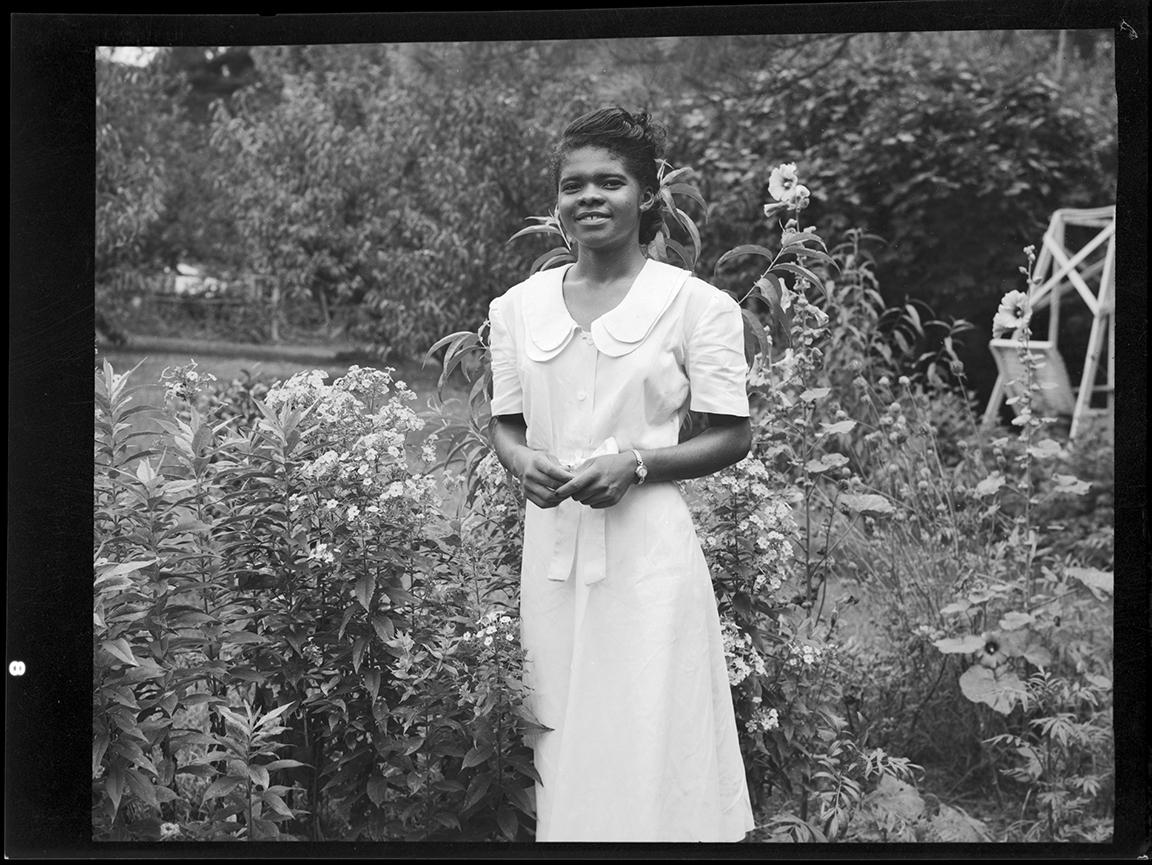 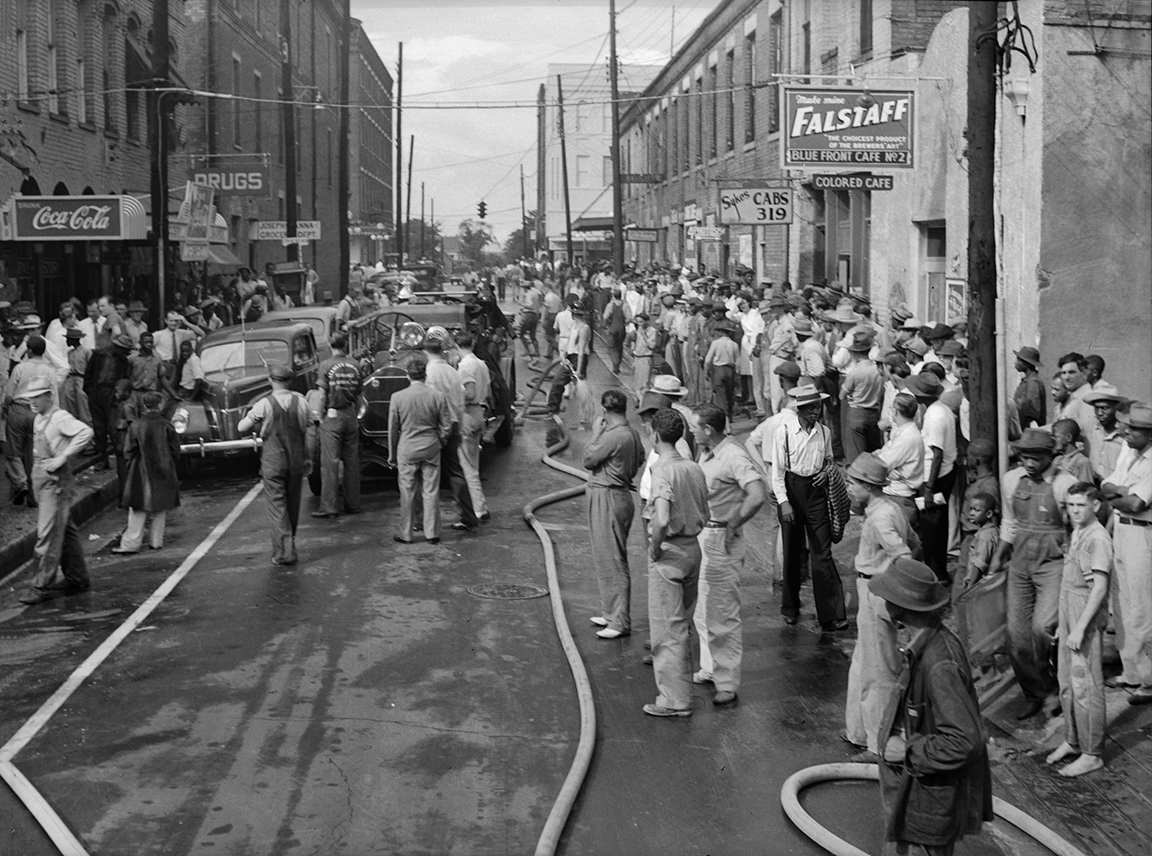 (Above Left) Garden Portrait. Young woman in garden, circa 1940s-50s. (Above Right) Catfish Alley. Catfish Alley fire, circa 1940. Pruitt’s photograph depicts a tableau vivant of street theater in the manner of many calamities he photographed such as tornado aftermath, traffic accidents, horses trapped in quicksand. From the late nineteenth through the mid-twentieth century, Catfish Alley was a one-block-long strip of flourishing Black businesses. It was a small-town version of Black business districts elsewhere, whether Harlem in New York City or Sweet Au­burn in Atlanta. On Catfish Alley, Blacks could go to a modest medical clinic and be treated without having to go into a separate-but-unequal en­trance at the two white hospitals, Doster Hospital and Columbus Hospital. Among the Black doctors with a Catfish Alley office was Dr. Emmett J. Stringer, who in 1954 was president of the Mississippi NAACP. He worked with, among others, civil rights leader Medgar Evers. In this image, the de facto white conservatism and Black enterprise that contributed to Catfish Alley’s creation cannot hold sway in the face of a fire’s tumult. 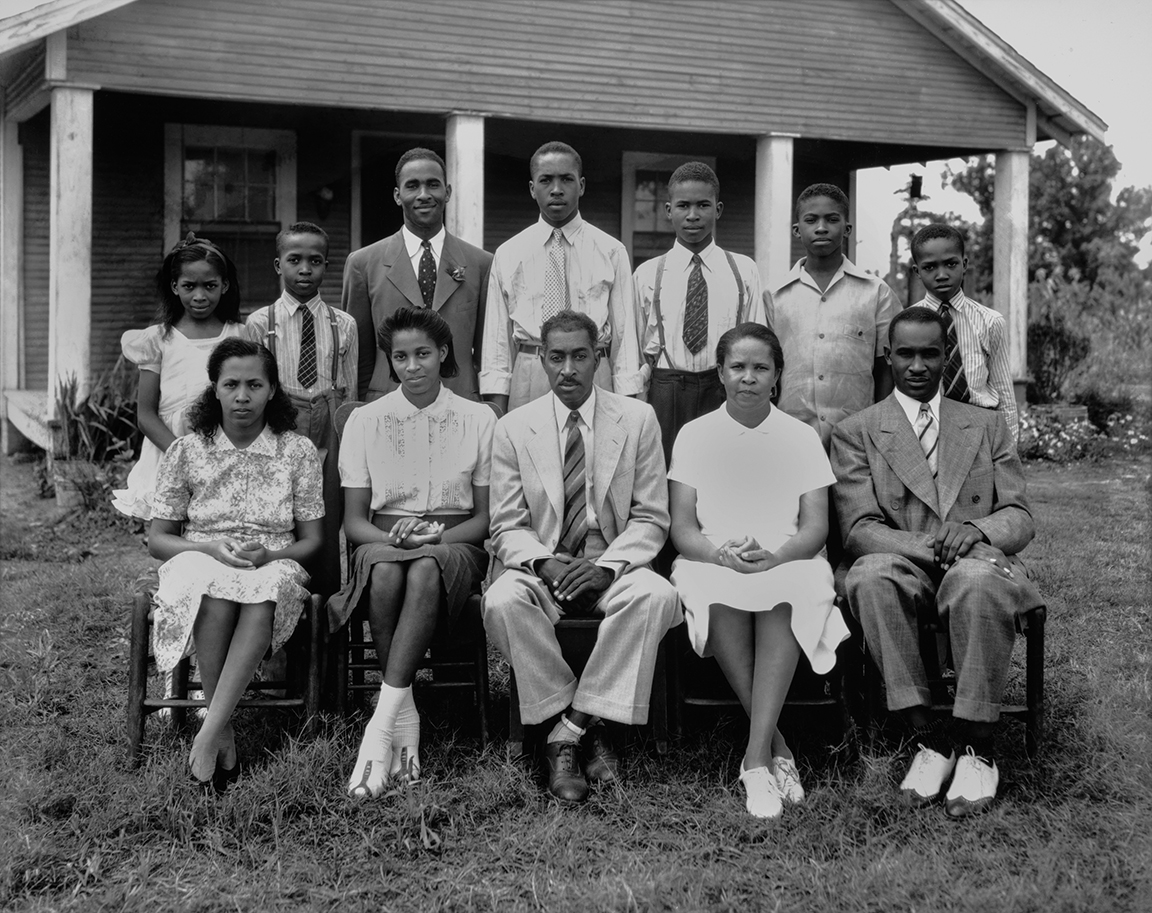 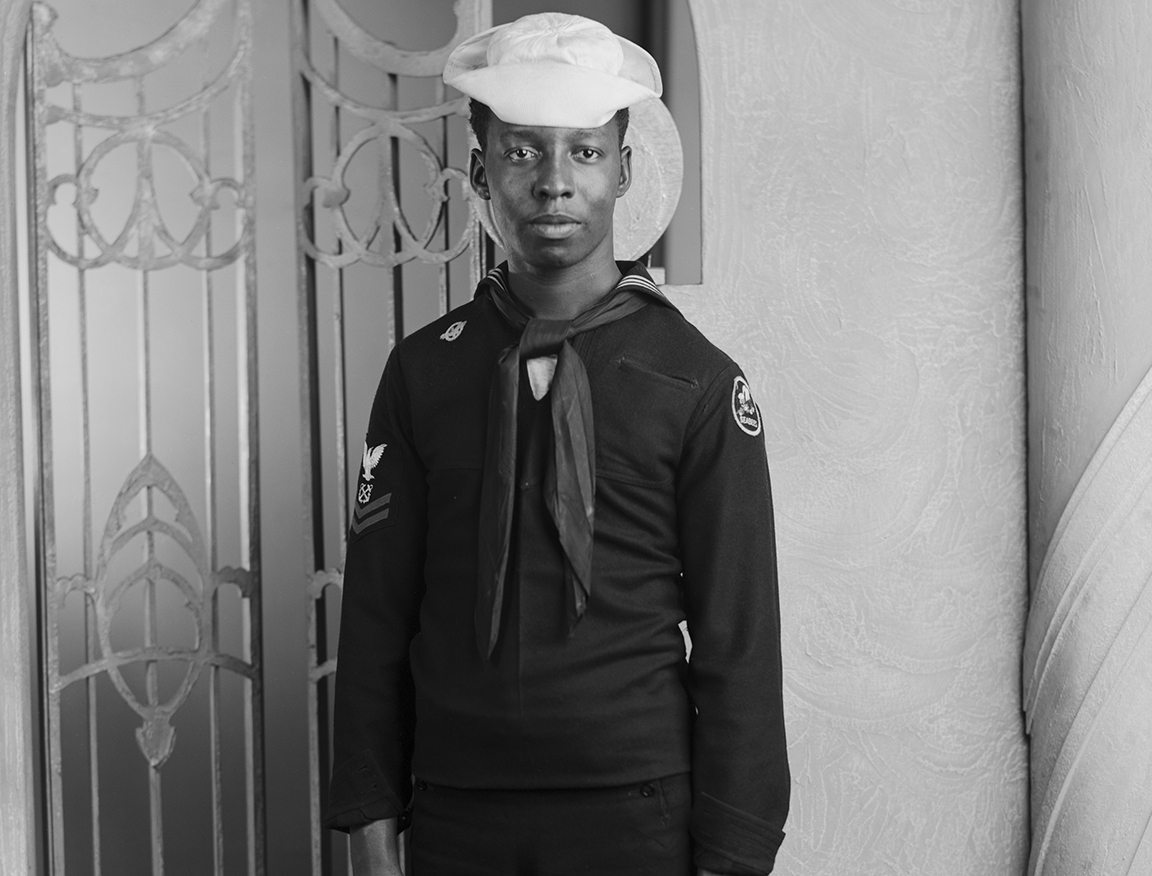 (Above top) Mann Family. Portrait of the James Mann family outside their home, 1948.(Above bottom) Navy Man. Studio portrait of young man in U.S. Navy uniform, circa 1940s-50s. 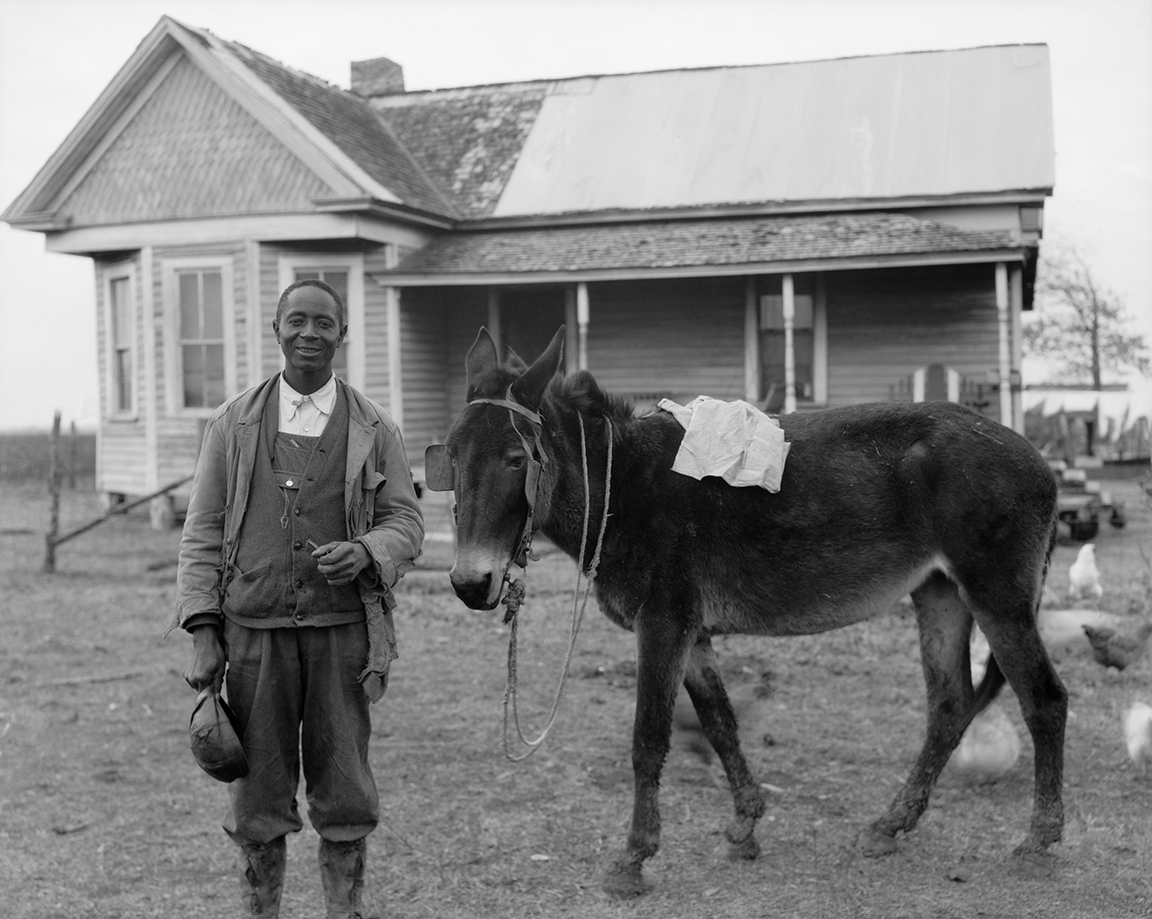 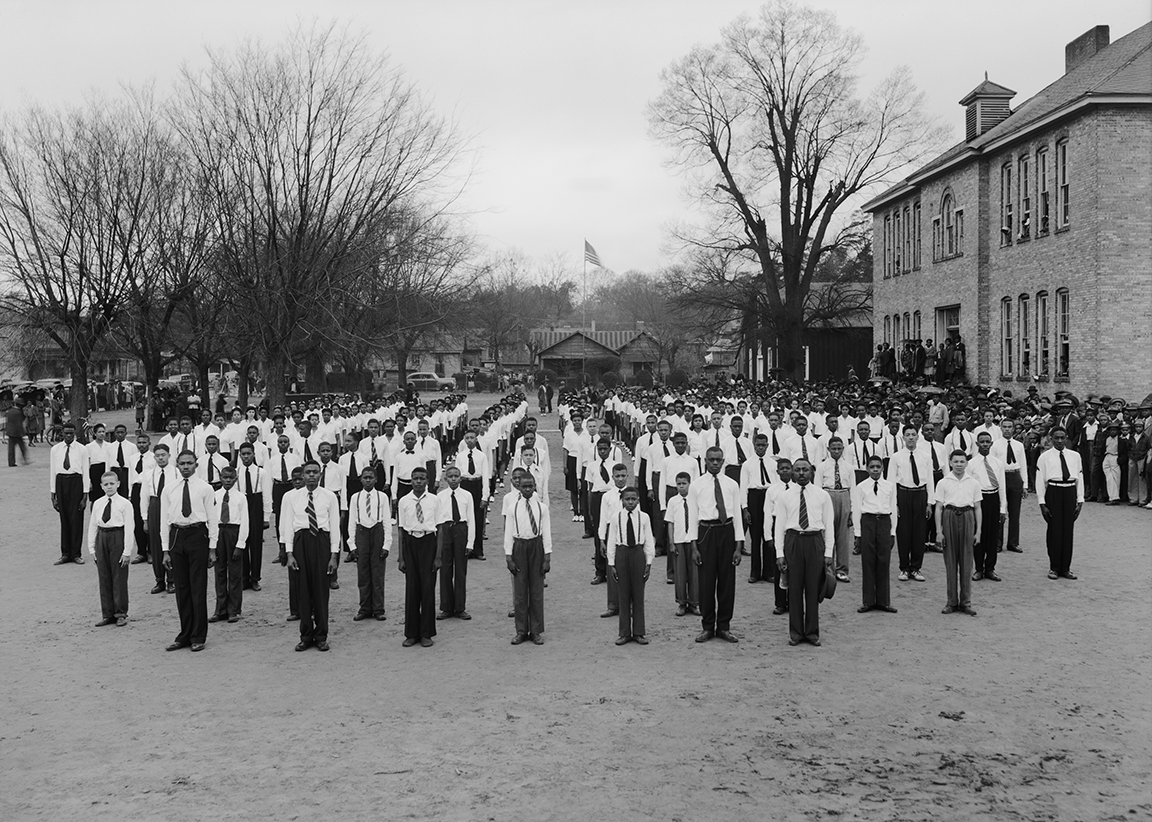 (Above Left) Sylvester Harris. Lowndes County farmer Sylvester Harris with mule Jesse outside his home in Plum Grove community, February 1934. Inspired by the fireside chats of President Franklin D. Roosevelt, Harris had traveled to Co­lumbus to call the White House. It took Harris ninety minutes on the phone, but he succeeded in getting Roosevelt’s help to forestall foreclosure of Harris’ farm during the Great Depression. The mainstream white press brought the story to the nation’s attention, but the Black press celebrated Harris as a savvy folk hero. Harris, in today’s parlance, went viral. So did Pruitt’s photograph that the Associated Press distributed. A media chain reaction of newspa­per stories, newsreels, cartoons, songs, preacher’s sermons, political speeches, and folklore sprang forth from Harris’s call to Roosevelt. As a thank-you, until the president died in 1945, Harris annu­ally shipped a Thanksgiving turkey to the Roosevelt’s Warm Springs White House in Georgia. (Above right) Union Academy. Union Academy, circa 1930s–40s, with male students pictured in front, females in back. The school was founded December 1865 as the first for freed Blacks in Columbus. Originally, the building had been a Confederate hospital during the Civil War. In the 1920s and 1930s, Union Academy teacher Annie Will Alexander led one of the most popular local choirs, a countywide group of African Americans, often with 125 voices singing gospel and spirituals. 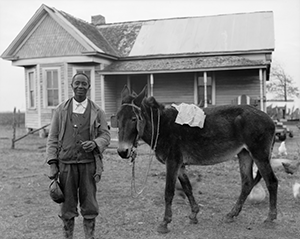